How to Lead Women in Japan 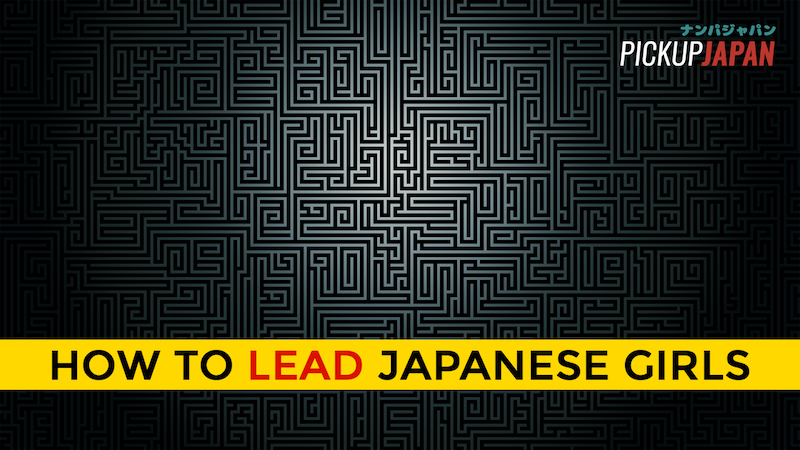 Japanese women want to be lead through an experience. They don’t want to decide the experience, they just want to have it safely.

When leading a Japanese girl, they have to trust your strength that they will be safe with you on that journey.

It’s Sunday morning and I just jumped out of bed at the crack of 2:28pm to write the above words down. I’m with a Japanese girl I met the night before at a club here in Osaka and we’re lying around talking.

“So, when did you decide to sleep with me?” I ask her. She doesn’t want to tell me but finally she admits that it was after I tossed her on my bed and climbed in after her, which is interesting because it wasn’t all smooth sailing from there.

Then I ask her about the other guys in her life. You see, every attractive Japanese woman has one, two, three or more guys out there who are e-mailing and calling, and asking her out on dates. And every time I start a relationship with a new Japanese girl, I always want to know, why me? Why didn’t she end up with those other guys who have been trying so hard to win her over. Why could I just come in and sweep her off her feet?

One guy she met through friends at the beach—she calls him “Sportsman” because he’s muscular. This guy is a good looking guy, but she won’t go out with him. He tells her he’s good with Japanese girls, motte motte, and she believes it’s true. He displays his muscles for her.

The other guy does delivery at her store. She likes him. She wants to be with him. She tells me he’s got a great personality. I ask her what the problem is, how come she’s not with him right now instead of me. She told me that he’s a “bit weak”. He asks her out, but buckles at the least bit of resistance. He doesn’t push it. She thinks he’s afraid of rejection so he just let’s it go, playing aloof to hide his weakness. Interesting…

She says she likes a guy to lead and as I’m hearing her, in my mind I’m reviewing the evening’s chain of events that led me to where I am now. I’m reviewing my life experience with Japanese girls and I’m feeling back to the time when I was that delivery guy. It’s not hard for me to recall that time because it was just a few years ago, and only recently that I stamped that guy out completely. Even now, I can still hear him vaguely in the background, more like a mother really, “Don’t go that way, it’s dangerous and I worry. Don’t make mother worry.”

It’s hard to remember all the times I was that delivery guy because there are too many bad memories to keep them all straight. I can remember the feeling though. The powerlessness, the feeling of uselessness, and confusion as I watched my life unfold and the slow motion crashes. Dating to me used to be like some kind of natural disaster. Inevitable, overwhelming, uncaring, and very, very destructive. I remember a girl I dated over 10 years ago on seeing a fellow classmate, tell me, “You don’t have IT. He does.”

But that didn’t discourage me. I always knew that if I could find out what it was that I could have it for myself. I watched the it guys, I studied them, and what they did and how. I copied them, their attitudes, they’re clothes, they’re body language and mannerism—trying them on, trying to figure out what constituted it.

I modeled a variety of guys with different styles, melding them together, taking what seemed to work best for me. And then in November 2004, I found out that there were guys out there, pros, who studied this stuff like scientists. Coming up with theories, hypothesizing, and testing them out like any professional researcher. My learning accelerated. I got some top notch coaching, and I continued to work at it. And then BOOM! Here I am, almost three years later.

Anyway, back to the story. I then suggest we leave the club to grab a bite to eat. She says she doesn’t want to go and then, less than 5 minutes later, I take her hand and lead her right out of the club to grab some food around the corner which was just the first step in the journey that finished with more than just a filling meal.

These memories, the good ones, are still easy to remember, they are a regular part of my life now, but not so much that they are completely normal to every part of my self. Even while doing what I’ve been learning to do all these years in my journey towards manhood, towards sovereignty, it’s strange to be so comfortable when I enter that mystical zone like feeling that comes from innate understanding.

Sometimes I step outside my self and I can see that, now, I’ve got IT. Now, I’m the model. Lead, lead, lead. This is what separates the men from the men.

So while I lead, I feel for those who can’t and I want to help them get to where I am in a way that I didn’t get help. I want to help all those delivery guys develop IT.

And here’s a simple thing you can start doing right NOW to help you lead next time you interact with a Japanese girl (or, likely any woman!). From now on, you’re going to stop being like most guys, following the woman’s lead. In dating, as in dancing, you as the man lead so she as a woman can just enjoy the ride.

Find out what foods she doesn’t like, and what kinds of things she does with her friends. Does she like eating ice cream on a hot day or maybe she doesn’t like sweet things at all. Learn about her and plan the experience you’re going to lead her through around that. Test and challenge her by taking her just a bit outside of her comfort zone.

Anyone can do what I do, any one of you can go into a club and have a sexy Japanese girl, or a hot Ukrainian model, give you their number right there while their boyfriends are watching, but you have to get IT first.

When I first came to Japan, I remember seeing people drinking their drinks right next to the vending machines and I used to wonder why they didn’t just take it and keep walking like we do back home. But I wondered, if maybe I was missing something, so the next time I was thirsty I decided to go through the looking glass and see it from the other side

I bought my drink and I stood there, trying to feel what that salaryman that I saw the day before was feeling. As I stood there, watching everyone hustle by on their way to their business, time slowed down for me and I looked around and saw, that I was taking a break. It wasn’t about the drink, it was about taking some time off from the hustle. Come and see things from my side.