How To Text Asian Girls 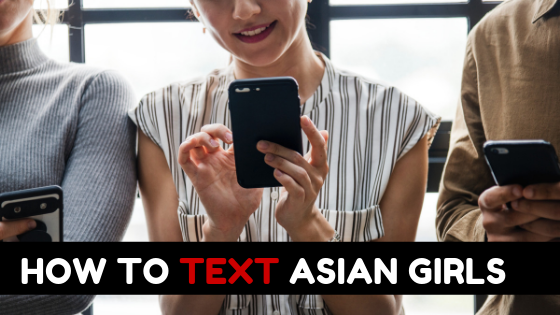 I originally learned pickup in the west (New York City, to be exact), so until I moved to Japan in 2013, most of my pickup and dating experience was with American girls in the big apple.

When I first came to Asia, text messaging was one of the first major differences I noticed. For some reason, my text exchanges weren’t going as well as I thought they should be. Girls weren’t responding, they were flaking on dates or just ignoring my attempts to schedule them for dates entirely. Something was wrong.

Gradually, I figured out what I was doing wrong and, with the help of RedpoleQ, I was able to adjust my text messaging to the point where I was able to get Asian girls to meet me regularly for dates after I’d gotten their numbers.

In this article, I’ll talk about some of the cultural differences between Asia and the west and give you a basic text messaging strategy you can use for Asian girls in countries like Japan, Korea, China and more!

What do Asian girls want?

Many western pickup instructors and courses encourage men to “make the girl chase you”, meaning that you make the girl put in more effort to get you than you put in to get her. There are a number of tactics used with that approach, but one of the most common ones is to text girls less, keep texts brief, limit use of emojis, etc.

When a guy texts a western girl too frequently, she’ll often perceive that as low value behavior.

This isn’t the case in Asia. If you text girls infrequently in Asia, they’ll just think you’re not very interested in them and give their attention to the guys who ARE willing to put in more effort (and if she’s an attractive Asian girl, she has plenty of options!)

Asian girls are very pragmatic. They’re often thinking long-term and looking for the guy who’s going to be the best time investment (meaning he could be boyfriend or marriage material). When you think of it from that perspective, it makes sense that an Asian girl would be more interested in the guy who is regularly showing interest and putting in effort to spend time with her!

Note: This does NOT mean being needy or pushy. That behavior is unattractive regardless of which country you’re in. You should be actively putting actively putting in effort to get Asian girls. Think charming and fun rather than needy and pushy.

Many years ago, we asked a few girls on the streets of Gangnam (one of the main shopping and nightlife areas in Seoul, Korea) how many text messages they receive per day and the answer was pretty shocking…

The average Korean girl receives 75+ messages per day on KakaoTalk (the most popular Korean messaging app). That’s insanely high and I’m sure the number is actually higher by now since we asked that question a long time ago when smartphone use was still relatively new.

If you want to stand out among 75+ text messages in a girls’ message queue every day, you’re going to need a good strategy and you’ll also need to be pinging her fairly frequently to make sure she’s actually noticing your messages.

Get Your Messaging Apps Straight

If you’re going to approach and message Asian girls who are living in Asia, then you’ll need to have the correct messaging apps on your phone. Each Asian country has a “main” messaging app that most people use. Here’s a list of each country and which messaging apps are popular:

Make sure you install and configure whichever app is the most popular in the Asian country you’re staying in. If you’re traveling around Asia, just install them all!

Also, go through the process of adding a friend so you don’t look confused when it’s finally time to exchange contacts with the girl you’re talking to!

Express Yourself and Have Fun!

One of the biggest mistakes guys make when texting Asian girls is that the interaction is too boring and the girl loses any attraction she might have had when you first approached her.

Keep the conversation emotional rather than logical. Don’t turn it into a game of “20 questions”.

When you’re talking to an Asian girl in-person, you can use gestures and facial expressions to communicate different emotions. When you’re texting, you don’t have those resources, so it’s good to use stickers and emoji for this same purpose!

Stickers and emoji are a great way to inject some fun into your text messaging with Asian girls. If you’re using LINE, KakaoTalk or WeChat, you’ll have tons of stickers at your disposal to use when texting girls.

Note: LINE and KakaoTalk each have a set of characters that are unique to the app. All Asian girls know these characters, so learn about them!

Some sticker packs will cost money, but they’re usually not very expensive. You can just use the free packs, but buying some sticker packs will give your texting more of a unique personality which is good for setting you apart from the crowd. I recommend picking a few packs that you personally like or that are a good reflection of your personality.

The main use-case for stickers are when you’re trying to express some emotion like: happiness, sadness, laughter, anger, etc. Usually words are not good at expressing those emotions, so stickers help convey the exact emotion you want the girl to experience.

This has the effect of making your conversations more “real” and it can also help stir up all of the emotions you might have given her when you initially approached her.

Try to Meet Her!

When texting girls, it’s easy to get stuck in endless conversation that seems to be going nowhere. Keep in mind that the goal of texting is to actually meet and go on a physical date with the girl you’re talking to, so always try to work towards a meet!

It’s important to remember that just because an Asian girl is hard to schedule a date with or flakes on a date you’ve already scheduled, that doesn’t mean she never wants to meet you ever. Asian people (especially those who live in big cities) have very active lives and are often juggling work, friends, family and other commitments that are higher priority than a guy she met on a dating app or talked to in a cafe for 15 minutes.

Persistence is key here. Don’t get angry or overly emotional. Just keep engaging her in fun conversation and keep offering chances for her to meet you.

Make it easy for her

You want to make it as easy as possible for an Asian girl to meet you. That means you should choose a date location that isn’t going to be too far from where she lives or works. If you’re only suggesting locations that would take her over an hour to get to, your probability of actually meeting her will go way down!

Obviously, your home logistics play a big part here as well. Try to live or stay in an area of your city that’s quite central or at least close to some good date venues.

You should also know enough about her personality to suggest date ideas that she would like or be interested in.

When Should You Give Up?

She’s not replying anymore. She hasn’t read your messages for weeks. What do you do when the conversation has died and she no longer seems interested? Should you just give up and move onto the next girl?

Ultimately, this is a personal call. It really depends on how much work you’re willing to put in, how much you like the girl you’re texting and how long things have been “dead” for.

I typically like to wait at least a few weeks before giving up completely. You never know what’s going on in her life. She could be dealing with a family emergency or she could be super stressed at work or school. You just never know with 100% certainty what’s happening in her world. So, chill out and give it some time. See if the conversation picks back up again.

Usually, if a girl stops reading or replying, I’ll still ping her every few days with some interesting stuff from my life or showing some concern for her. If the conversation stays dead after a few weeks of occasional pings, then you can probably call it quits and move onto other things.